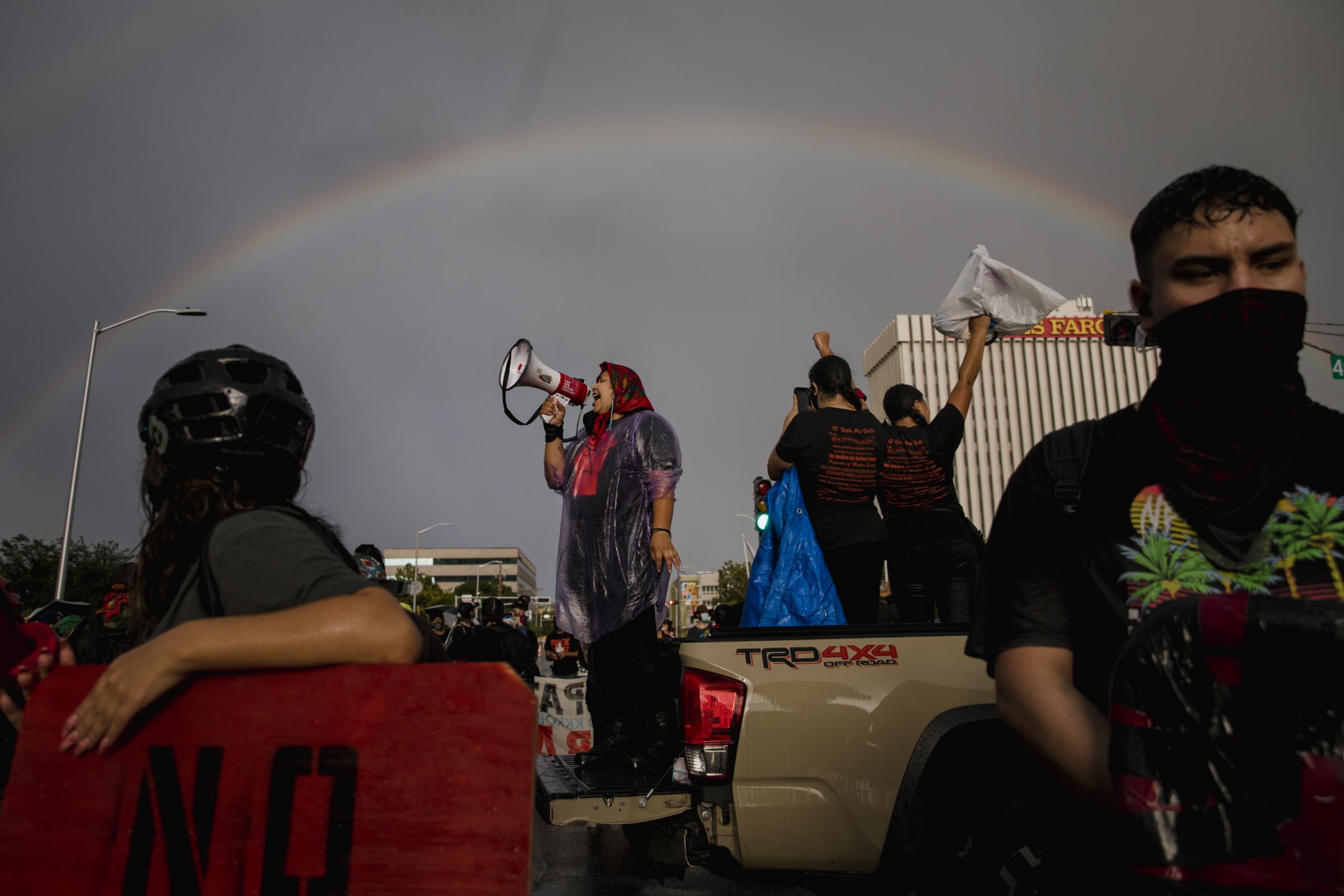 Hope Alvarado from The Red Nation, an indigenous activist group, speaks to a crowd of protesters during demonstrations against Operation Legend in Albuquerque, NM on July 31, 2020. Operation Legend is a federal law enforcement initiative of the Trump administration in what it said was an attempt to curtail surging crime in the United States. After a similar deployment in Seattle, the local activist group warned that the initiative would allow law enforcement agencies to violate the rights of those in the community, disproportionally effecting communities of color. 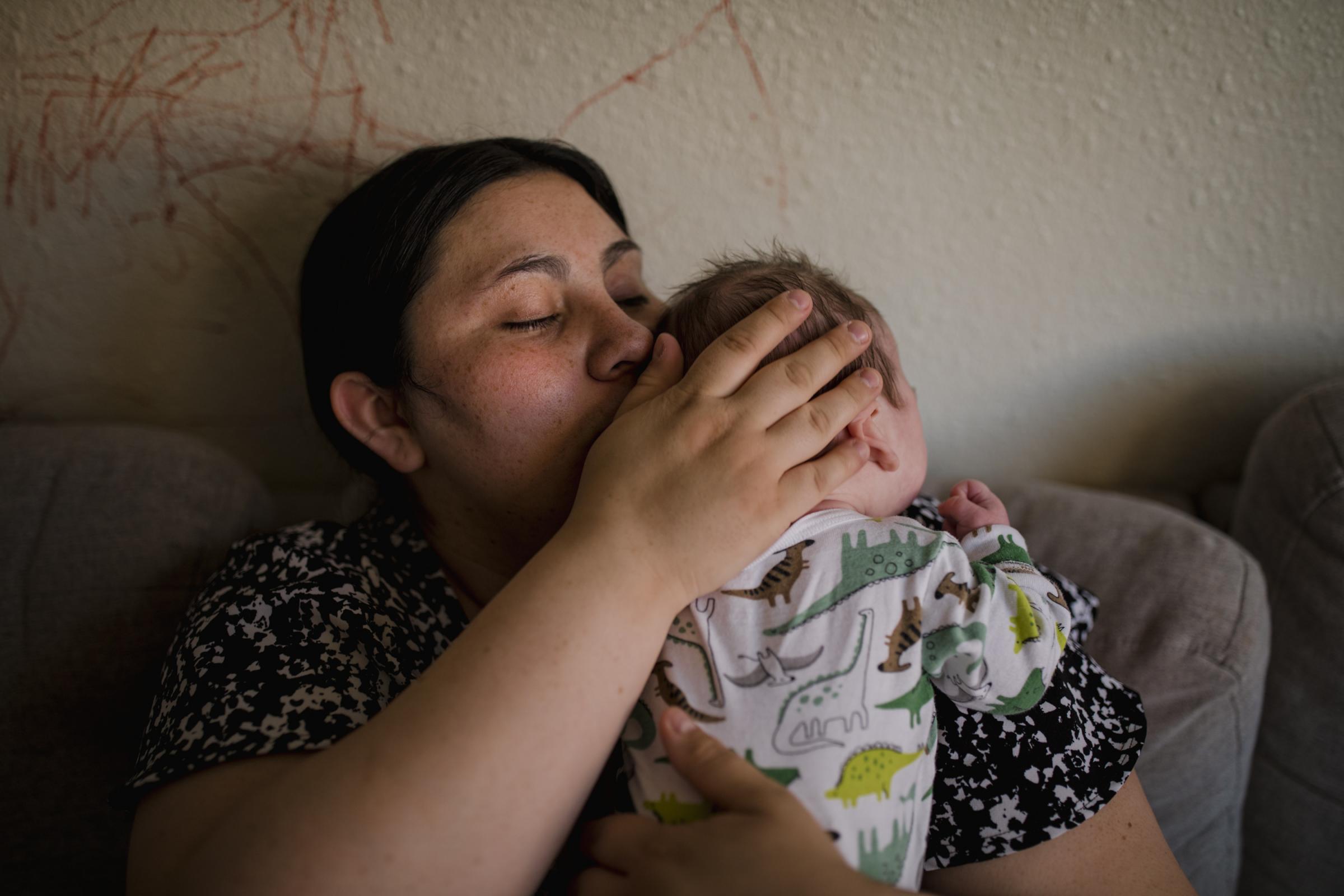 Alyssa Davis holds her infant son at her apartment in Albuquerque, NM. Davis sought income support through Temporary Assistance for Needy Families, the federal welfare program. However, Davis, like many mothers, was met with demands to seek child-support from her children's father though she was in a relationship with him. The stipulation is often a deterrent for mothers who desperately need financial assistance. 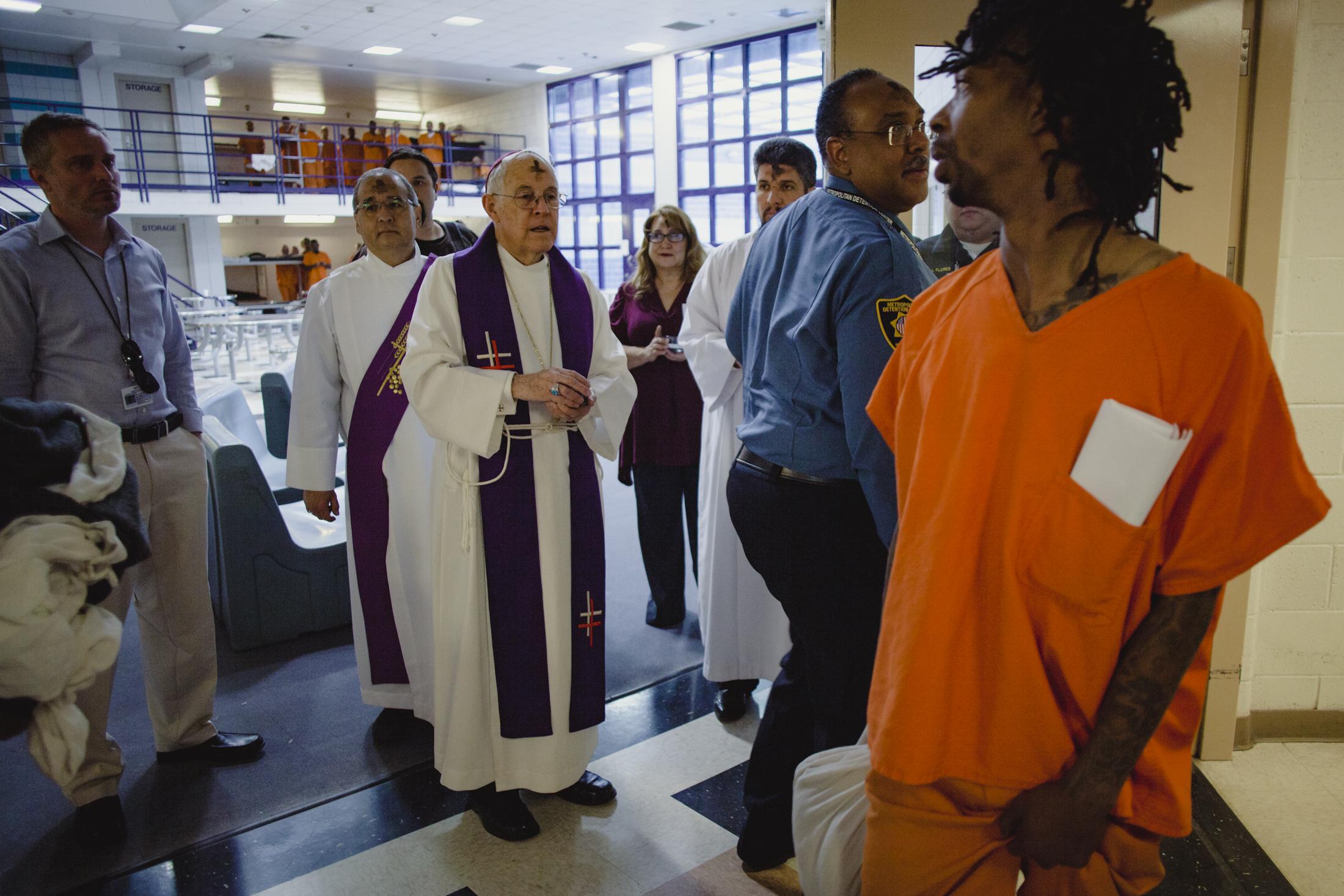 An inmate enters his pod where the Archbishop of Santa Fe, Michael Sheehan, blessed prisoners on Ash Wednesday at the Metropolitan Detention Center in Albuquerque, New Mexico. "You couldn't come to me today in the cathedral, so I came to you," said Sheehan. 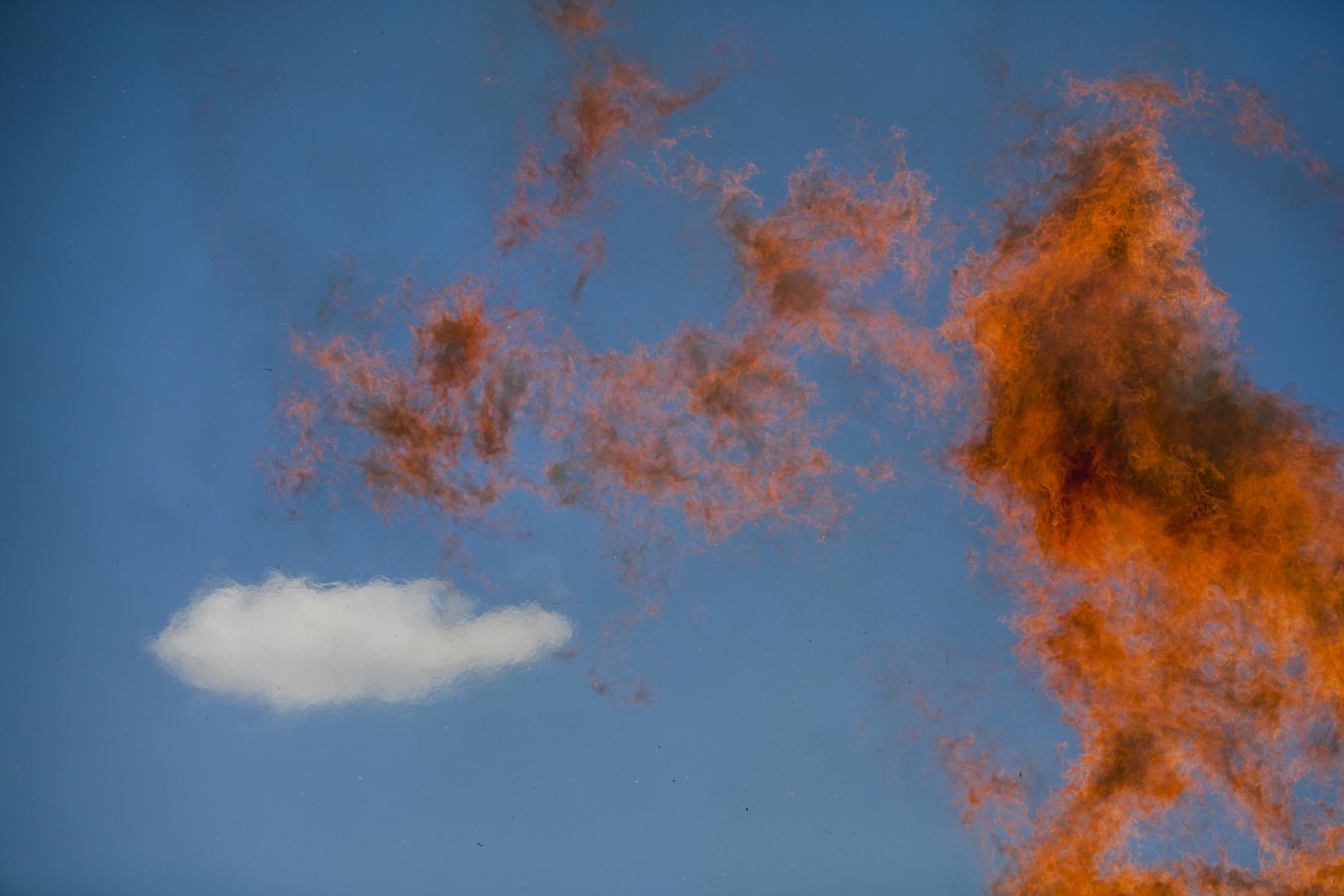 Flames rise high in the air as a pile of non-native tree species burns near the Pecos River in efforts to clear the thicket in the area on July 26, 2016. 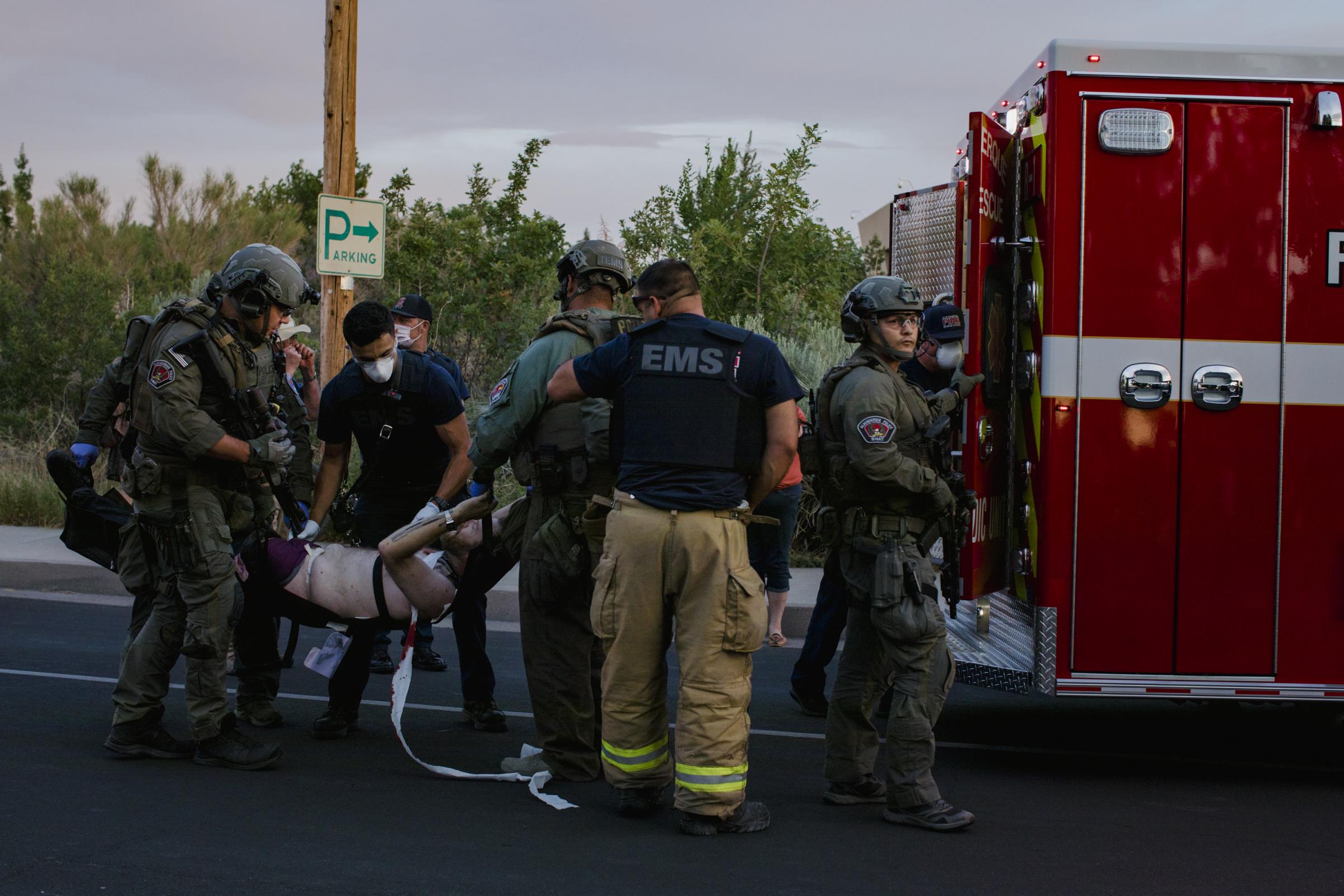 Tactical police officers assist the paramedics as they load Scott Williams into an ambulance after he was shot by Steven Ray Baca during a protest where opposing groups, including a militia, clashed in Albuquerque, NM on June 15, 2020. Baca was allegedly assaulting multiple protestors at the demonstrations calling for the removal of a statue of Don Juan de Oñate, a Spanish conquistador known for his brutal treatment of indigenous people. After assaulting a woman, Williams and fellow protestors began chasing Baca, who was conceal carrying a firearm. Baca shot Williams several times in his torso. 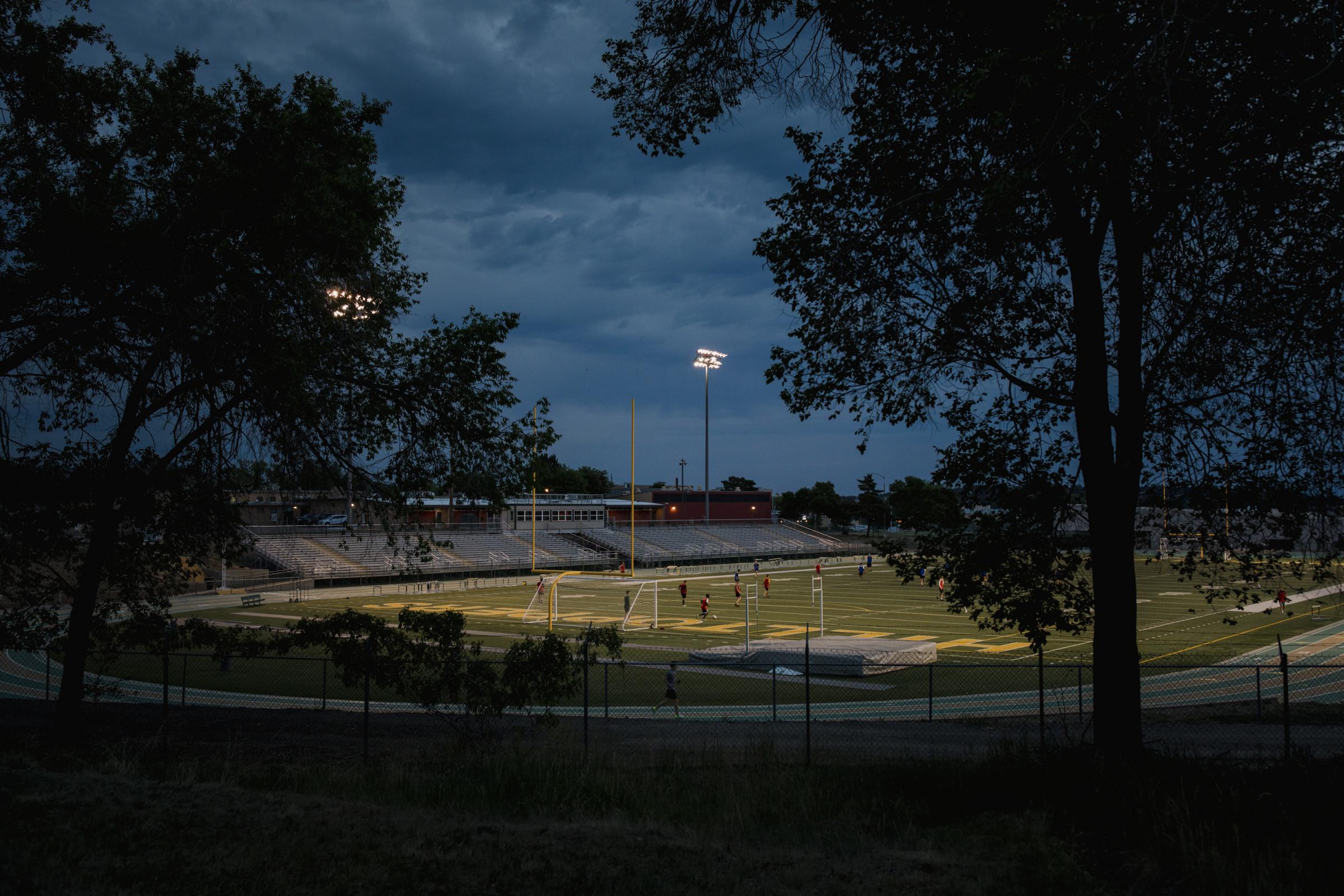 People play a pickup soccer game at the Los Alamos High School field in Los Alamos, NM on June 17, 2021. Los Alamos has been chosen as one of the healthiest communities in the United States two years consecutively by US News. 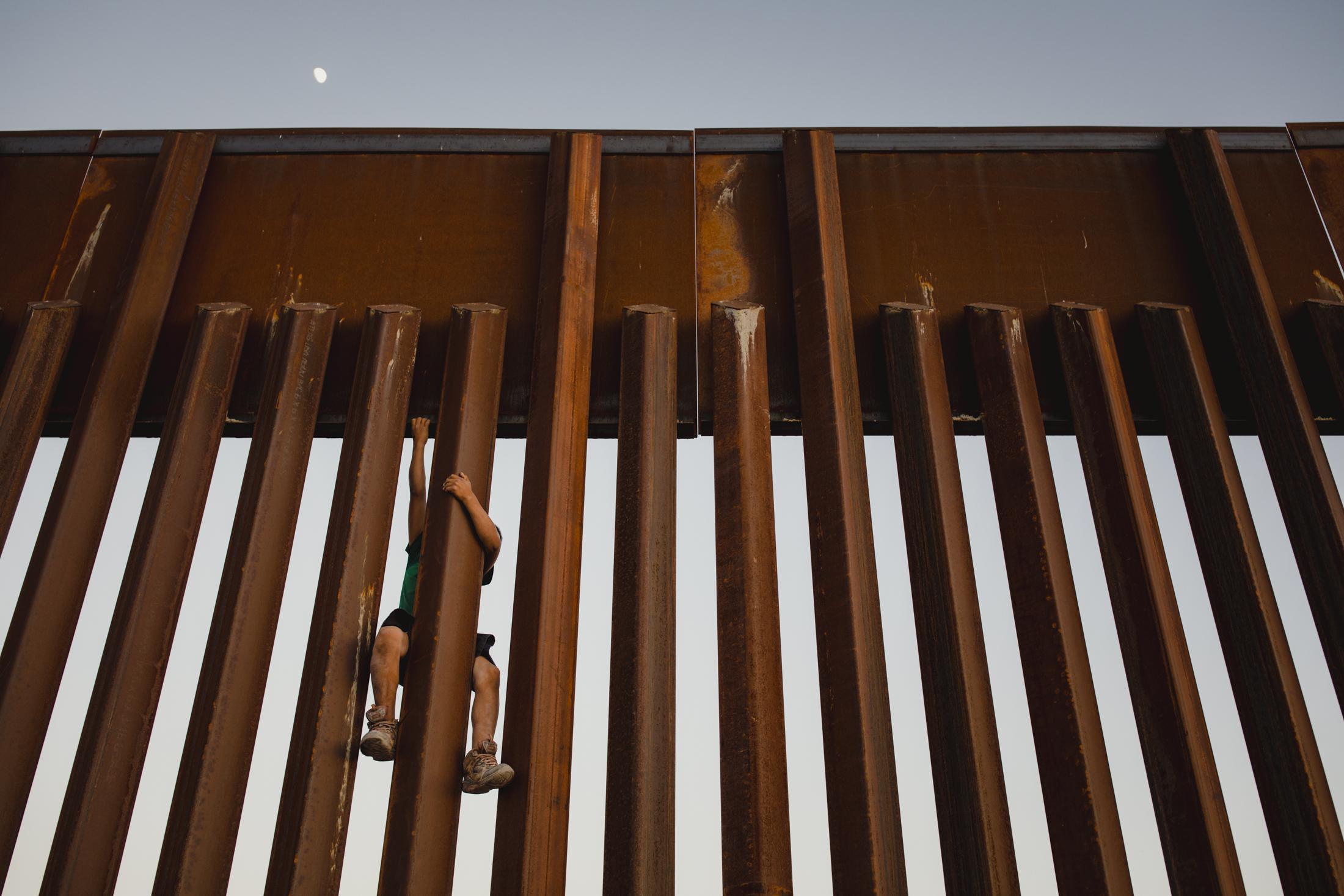 A young boy climbs the Mexican and United States border fence in Sunland Park, New Mexico in the summer of 2018. 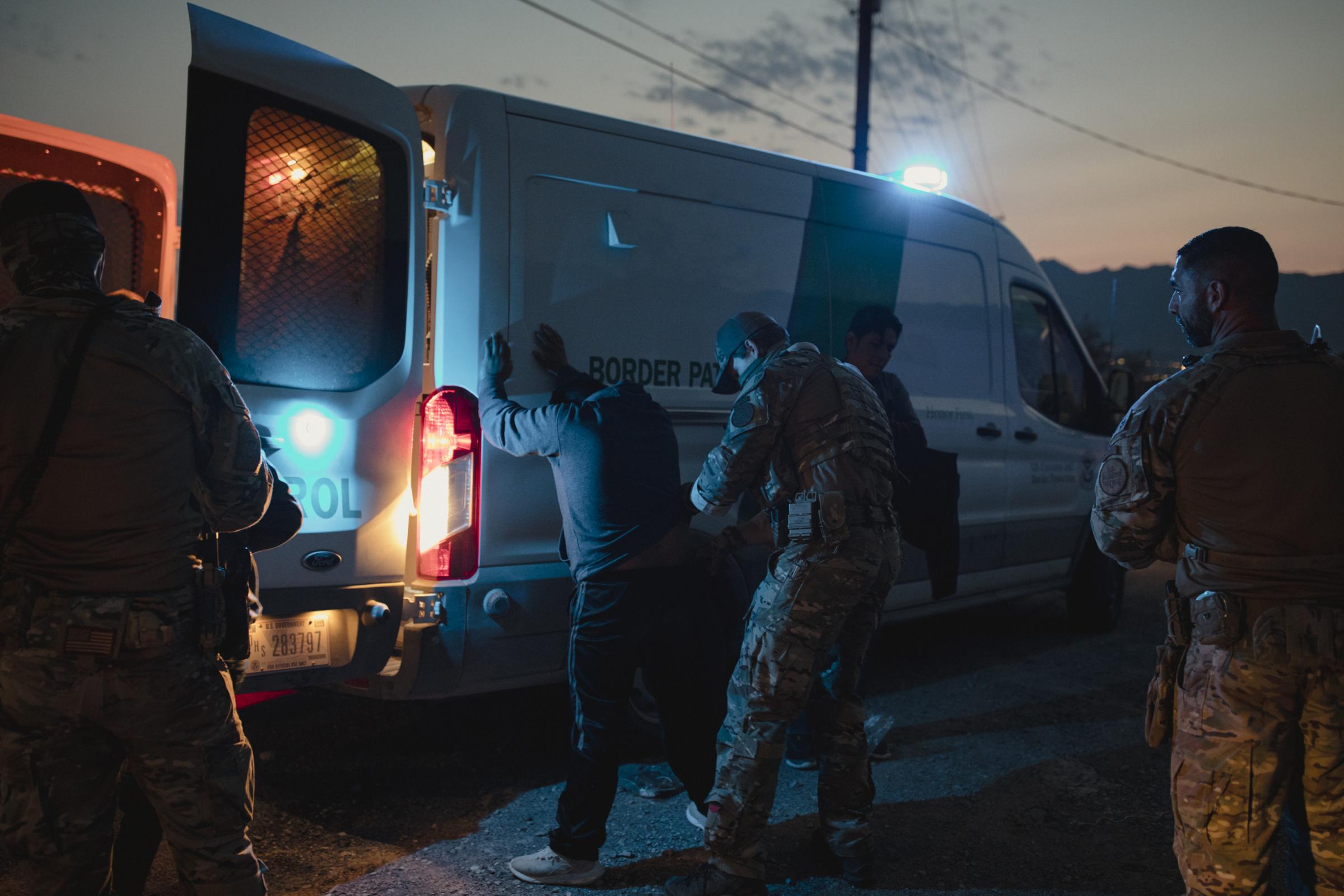 An agent with the Border Patrol Search, Trauma, and Rescue Unit (BORSTAR) search migrants after apprehending them near Mount Cristo Rey in Sunland Park, NM on July 21, 2021. 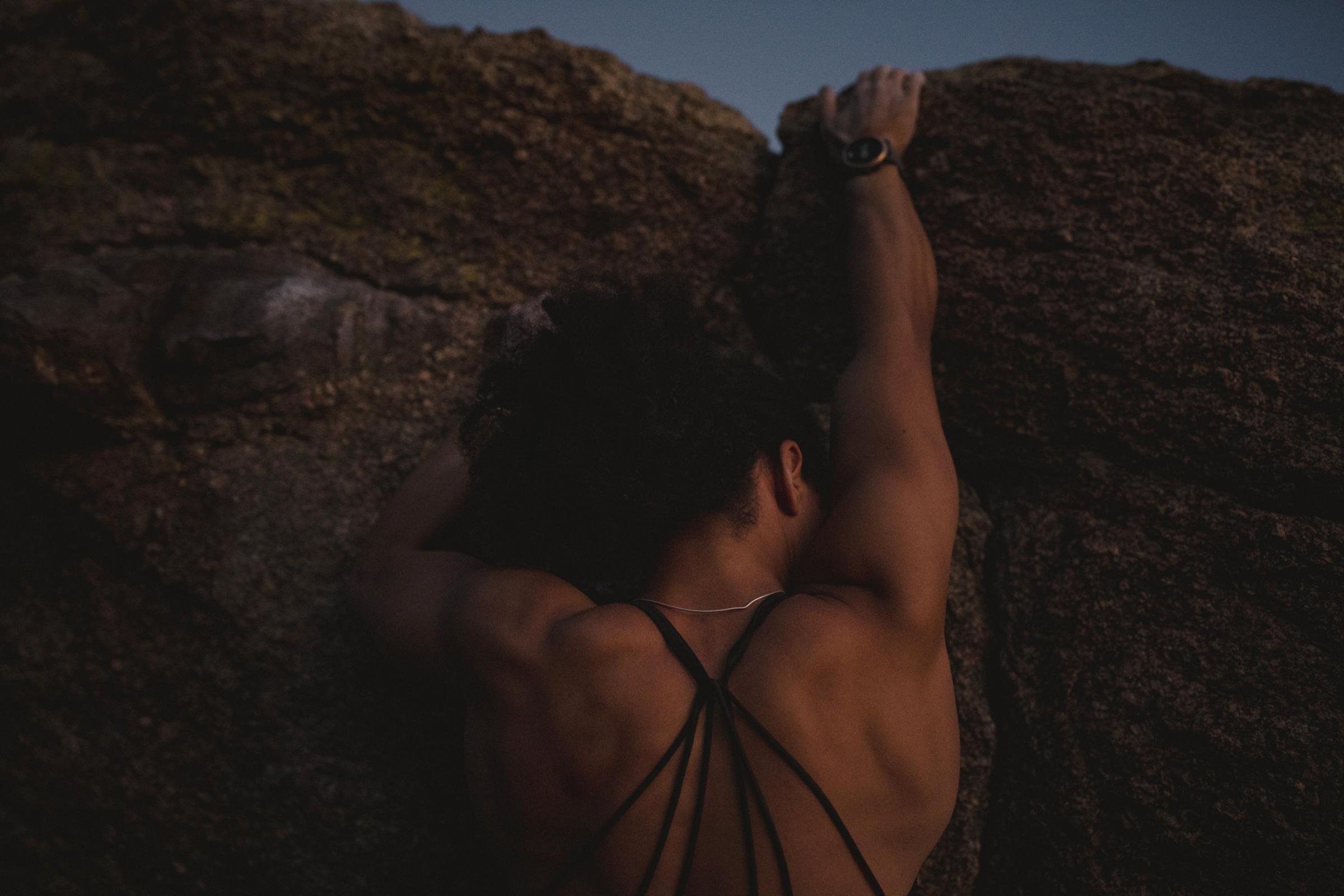 Favia Dubyk makes an ascent while bouldering at U-Mound in Albuquerque, New Mexico on September 6, 2020. 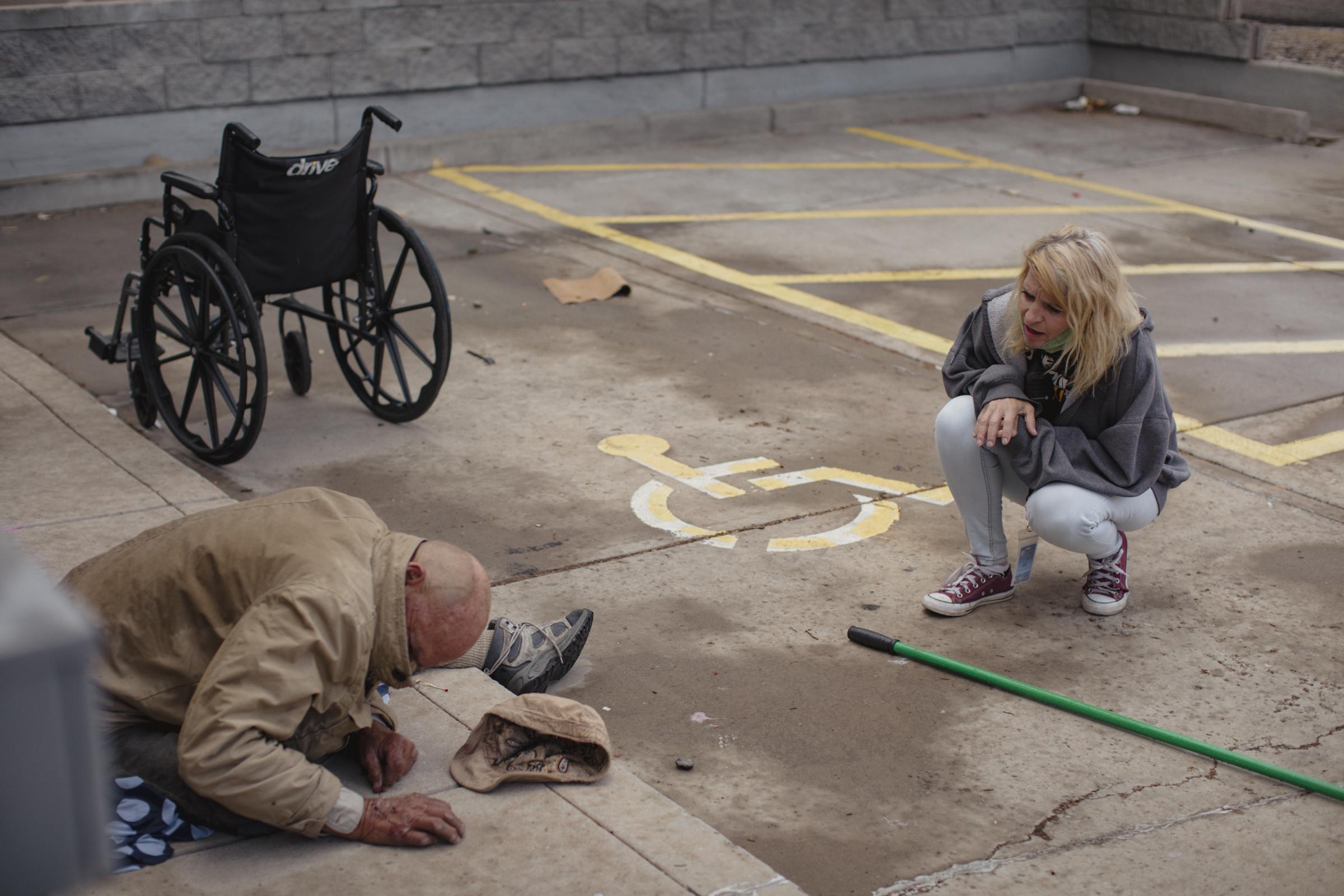 Behavioral health responder Leigh White speaks to a man who was hunched after he fell from his wheelchair in Albuquerque, NM on September 28, 2021. White is with the Albuquerque Community Safety program, a new arm of first responders available to address calls of low acuity such as those involving people with mental health and housing vulnerabilities. 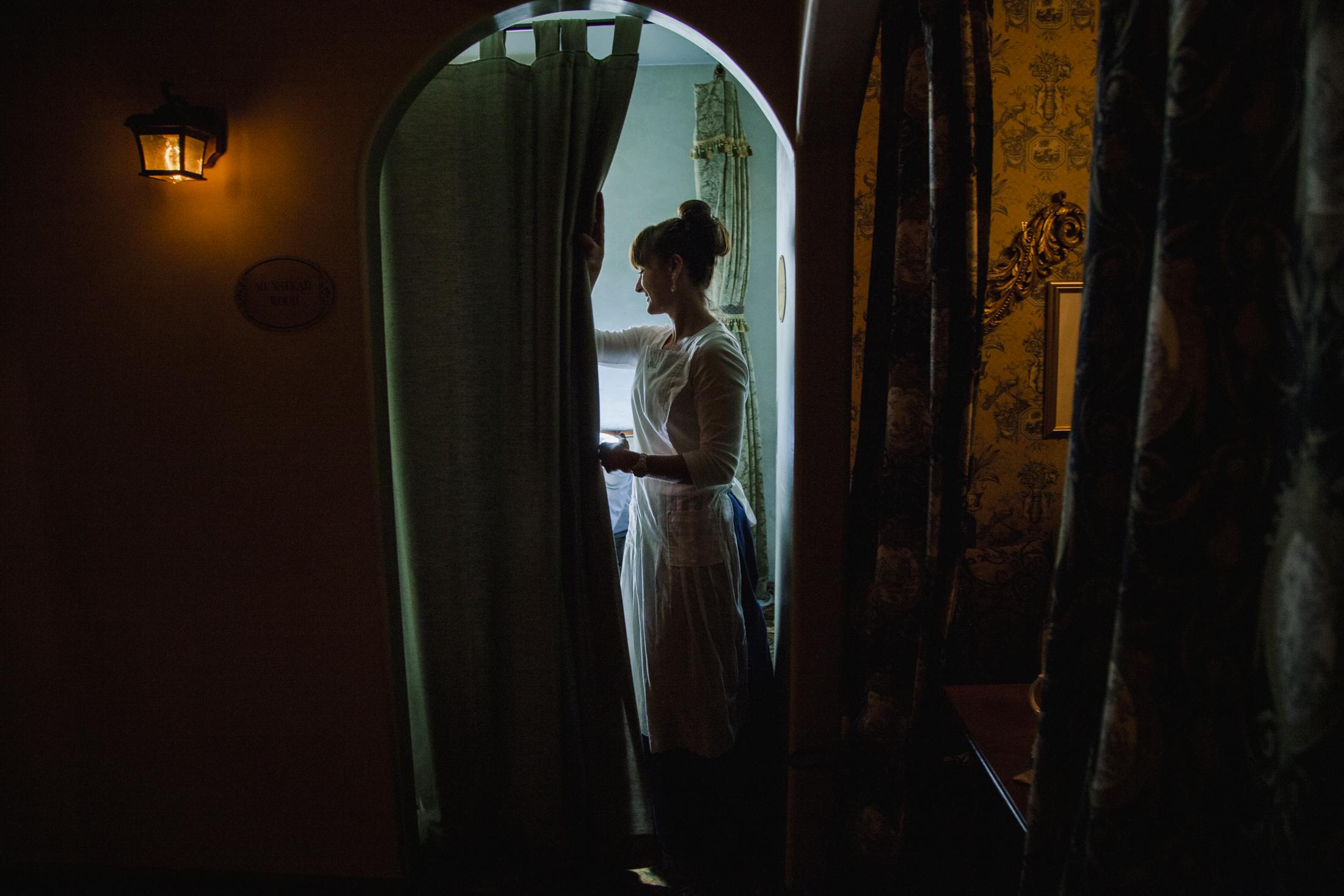 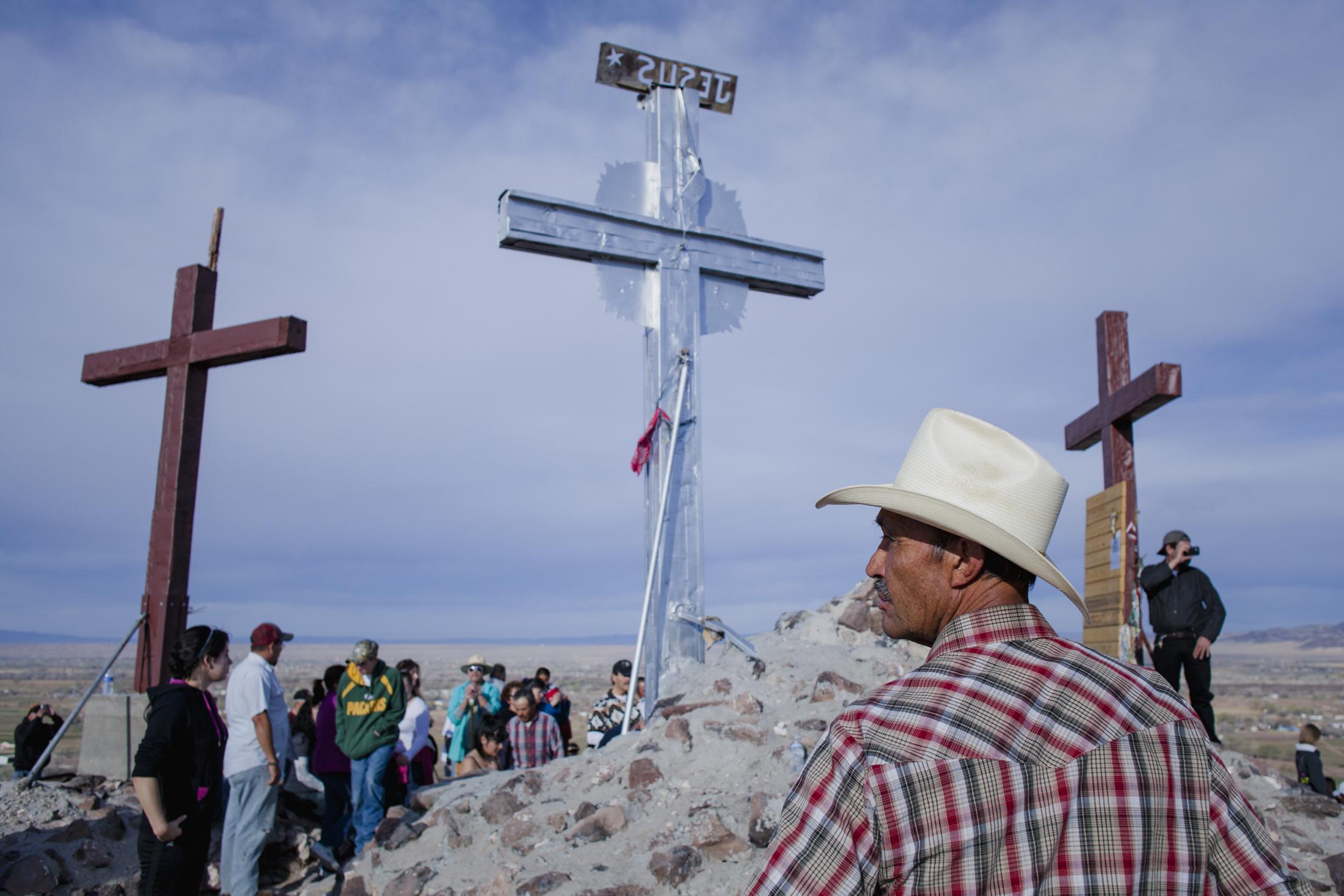 Roberto Doming stands at the top of Tomè Hill where thousands of pilgrims hike to observe Good Friday in Tomè, New Mexico. 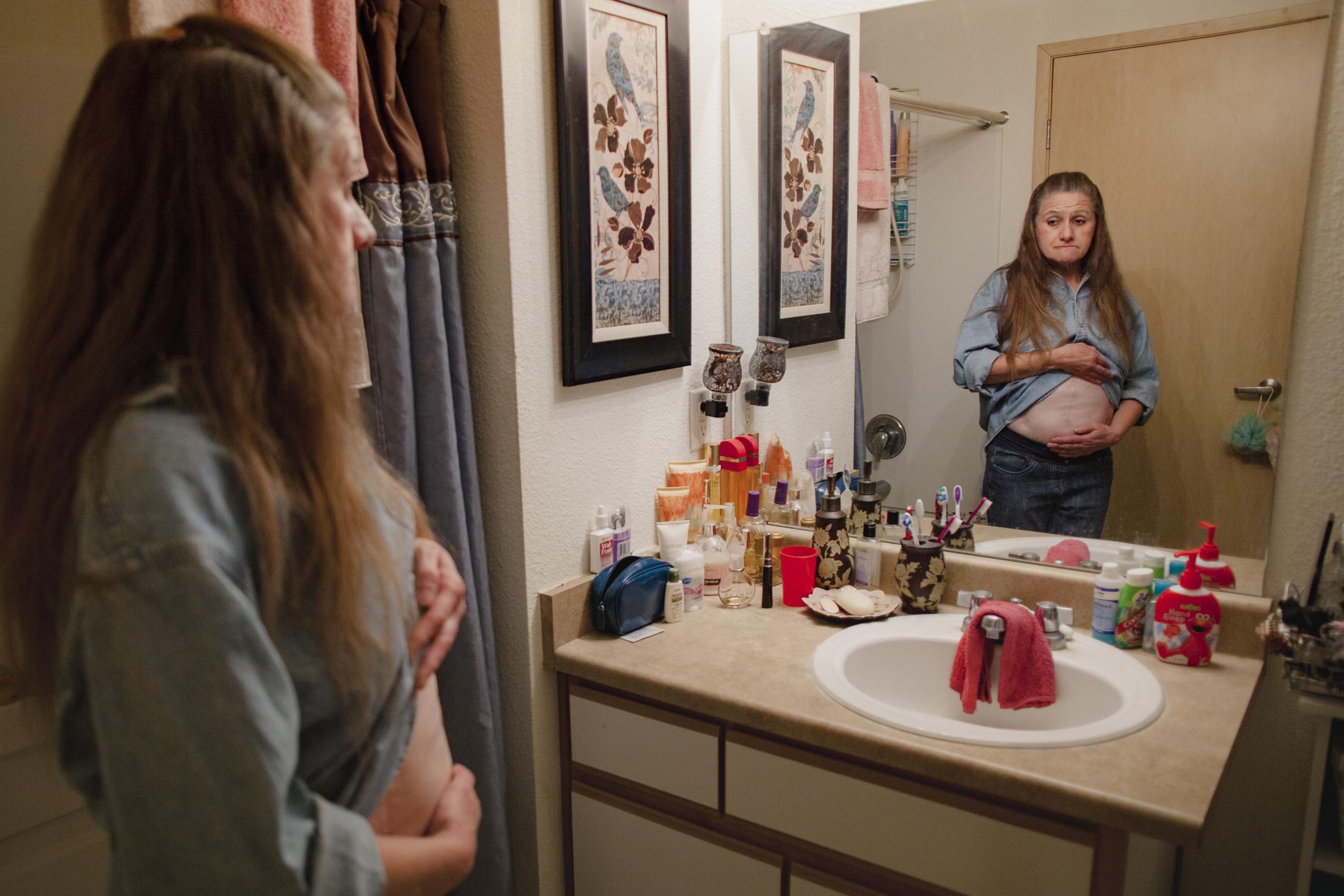 Deborah Holden was stabbed in her abdomen by a drunken and mentally ill neighbor, Benjamin Vigil, on the night of July 25, 2005. Holden's small intestine was pierced causing fecal mater to flow into her blood stream sending her to nearly fatal sepsis. Holden was not expected to live. Seventeen surgeries and eight years later, Holden looks at her stomach in the mirror admiring the work of the surgeons who she refers to as her "angels." In November 2006, Vigil was committed to the New Mexico Behavioral Institute in Las Vegas, New Mexico after being declared as incompetent and a danger to society. 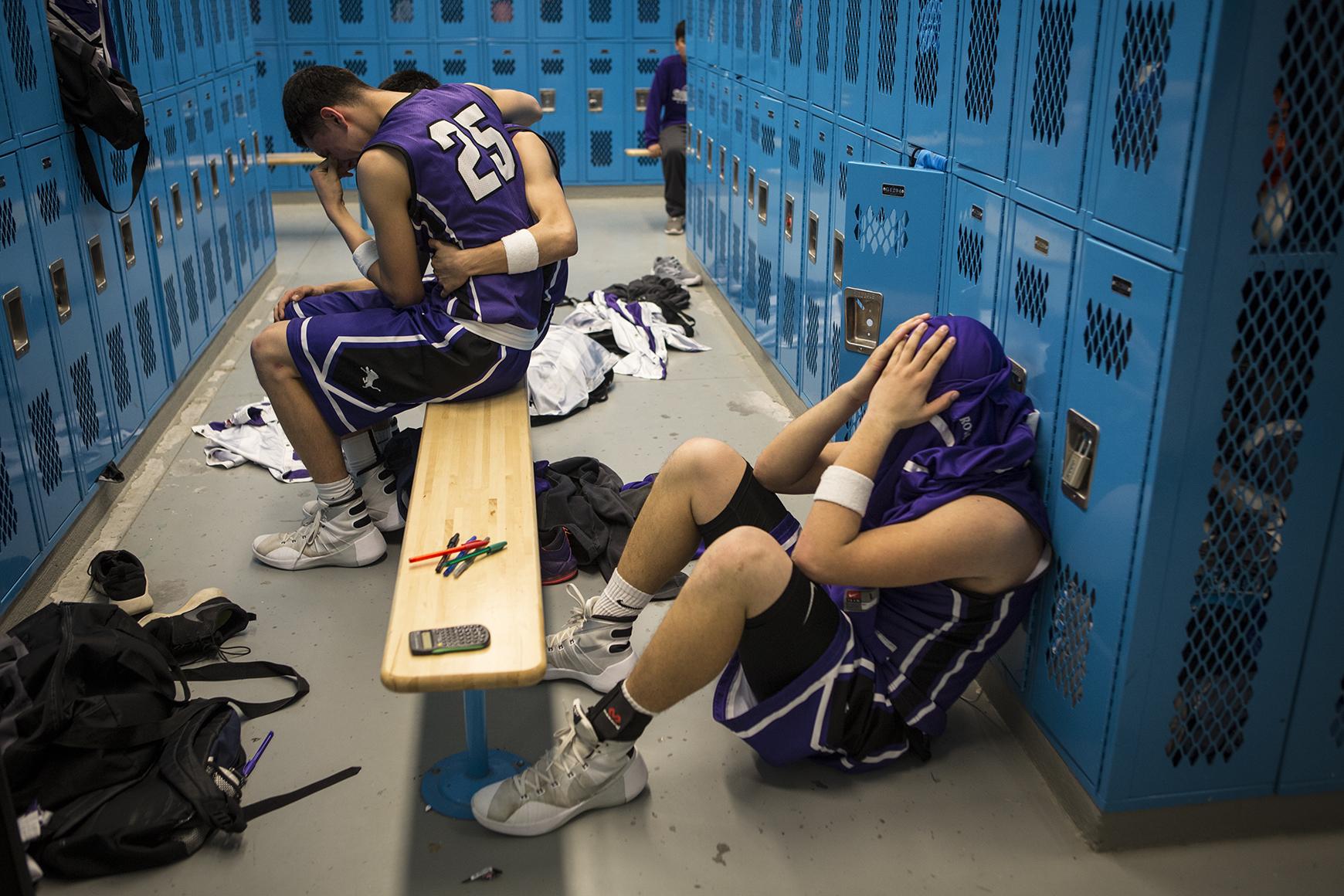 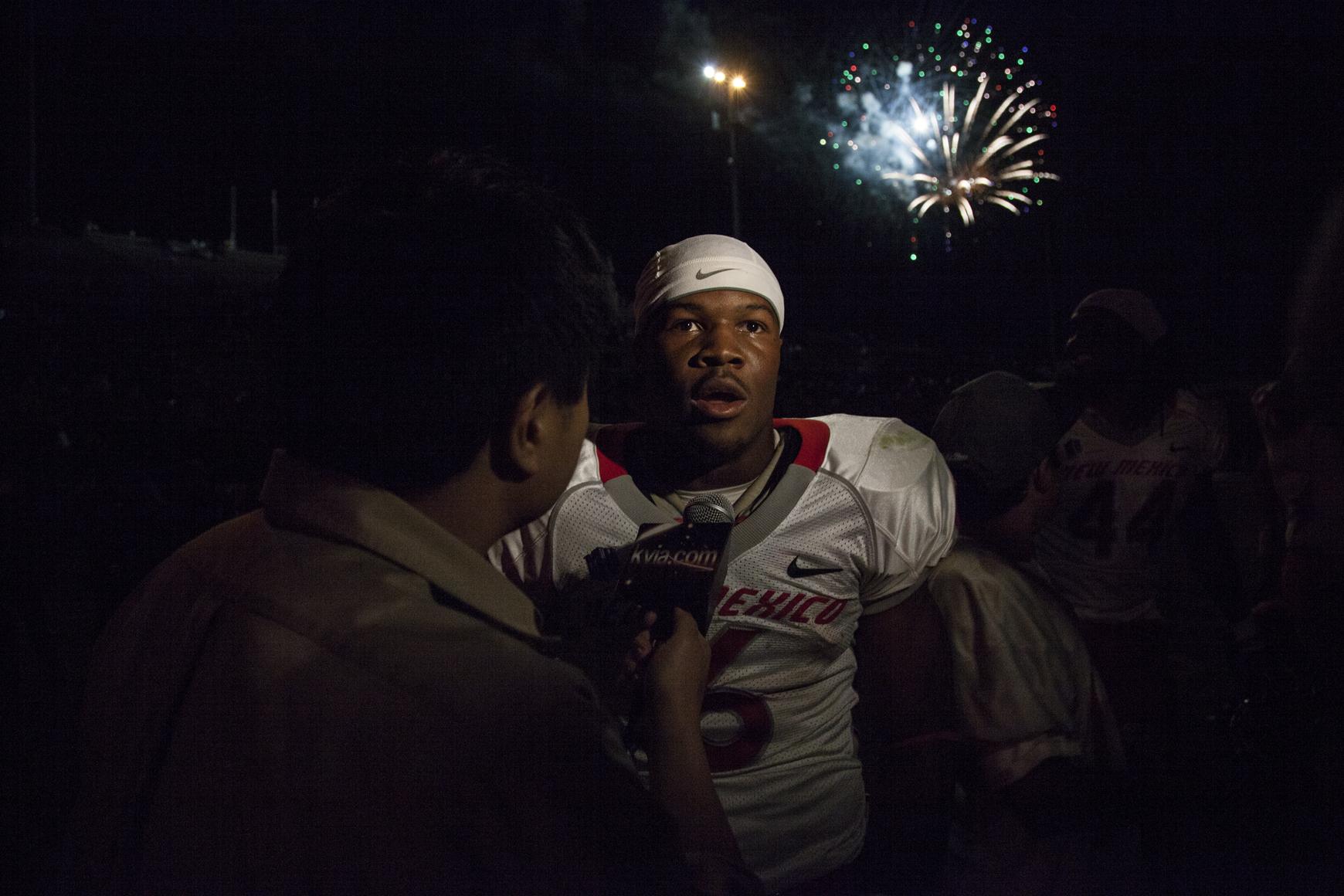 University of New Mexico running back Jhurell Pressley is interviewed by local media after a football game on September 22, 2012. 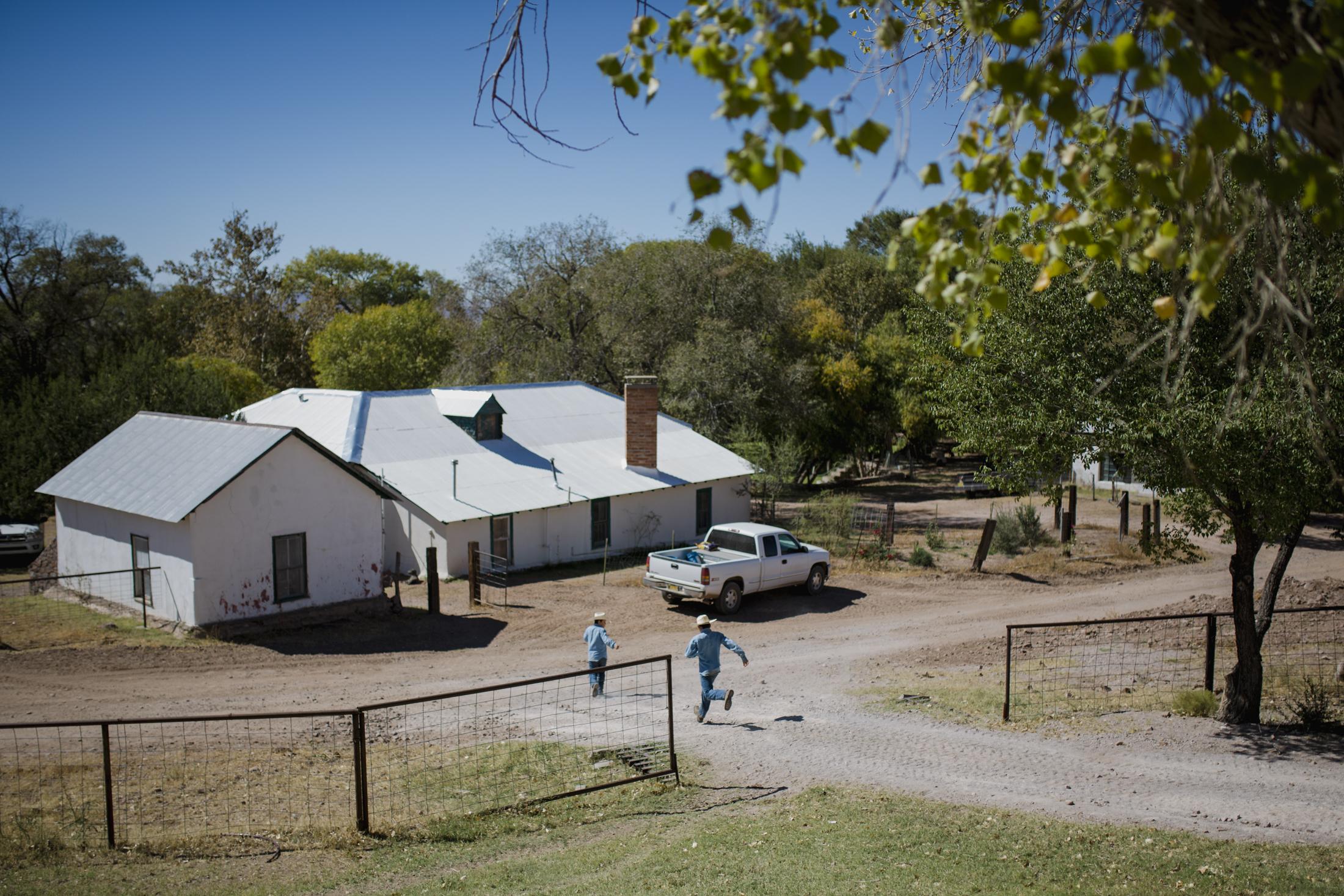 Brothers James and David Hurt run across their family's ranch in James and David Hurt in Antelope Wells, New Mexico. The ranch — one of the state’s largest, a mix of private, federal and state land — stretches from the U.S.-Mexico border to the south and east, across hills of mesquite and creosote 35 miles north to Hachita. 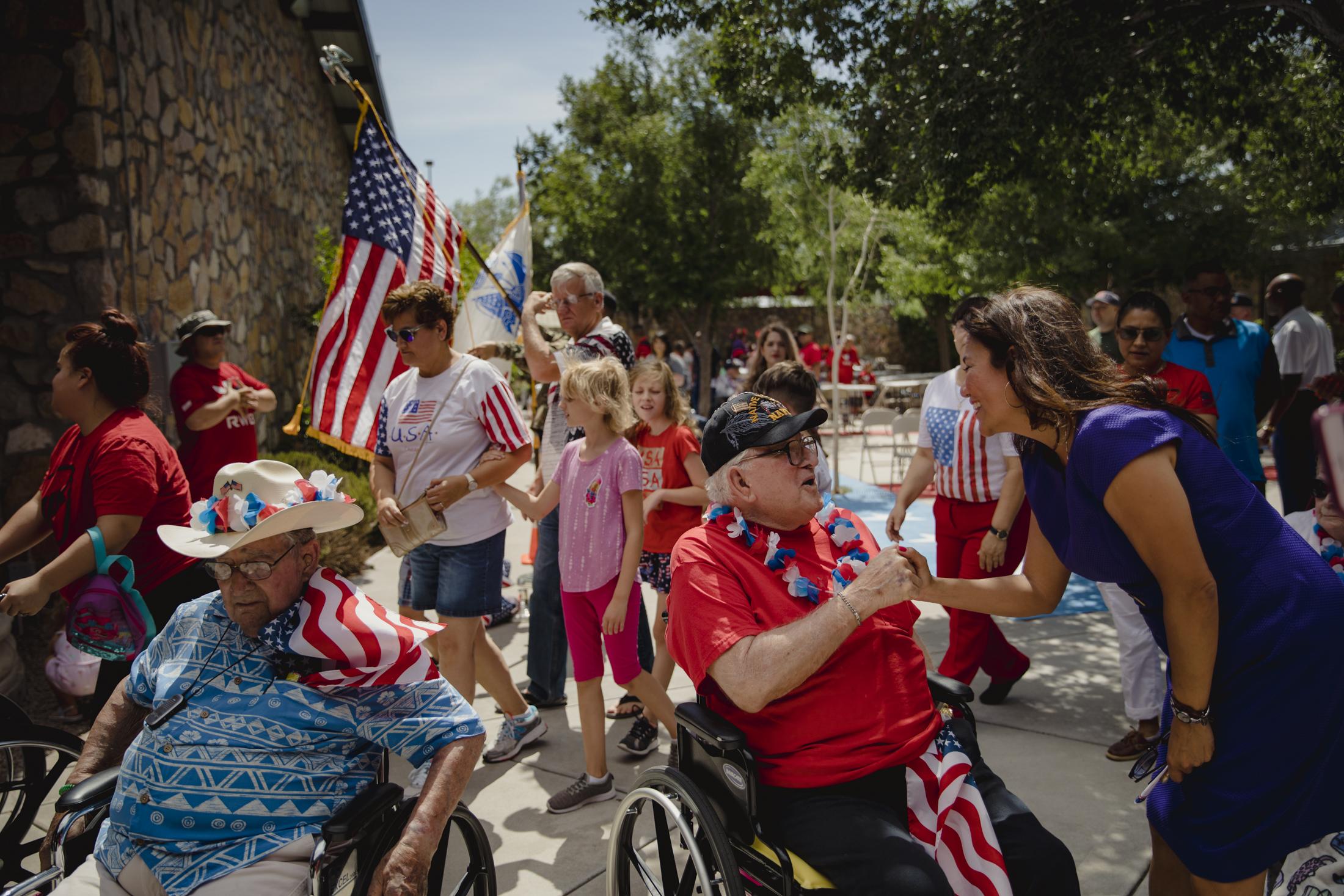 Congresswoman Veronica Escobar visits with veterans in El Paso, Texas during Fourth of July celebrations in 2019. 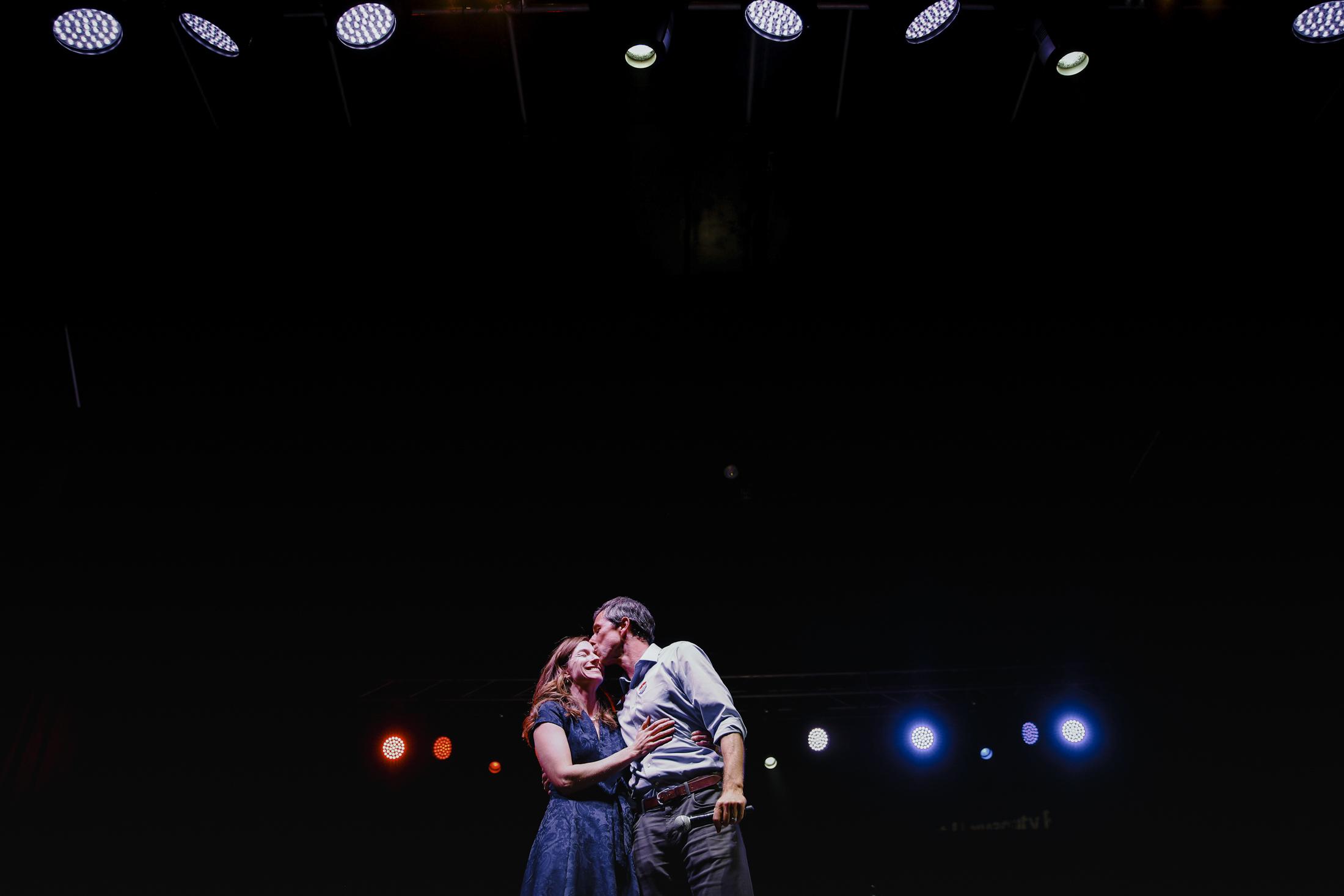 Beto O'Rourke kisses his wife during a concession speech after being defeated by Ted Cruz in the highly contentious midterm election for a senate seat in Texas on November 6, 2018. 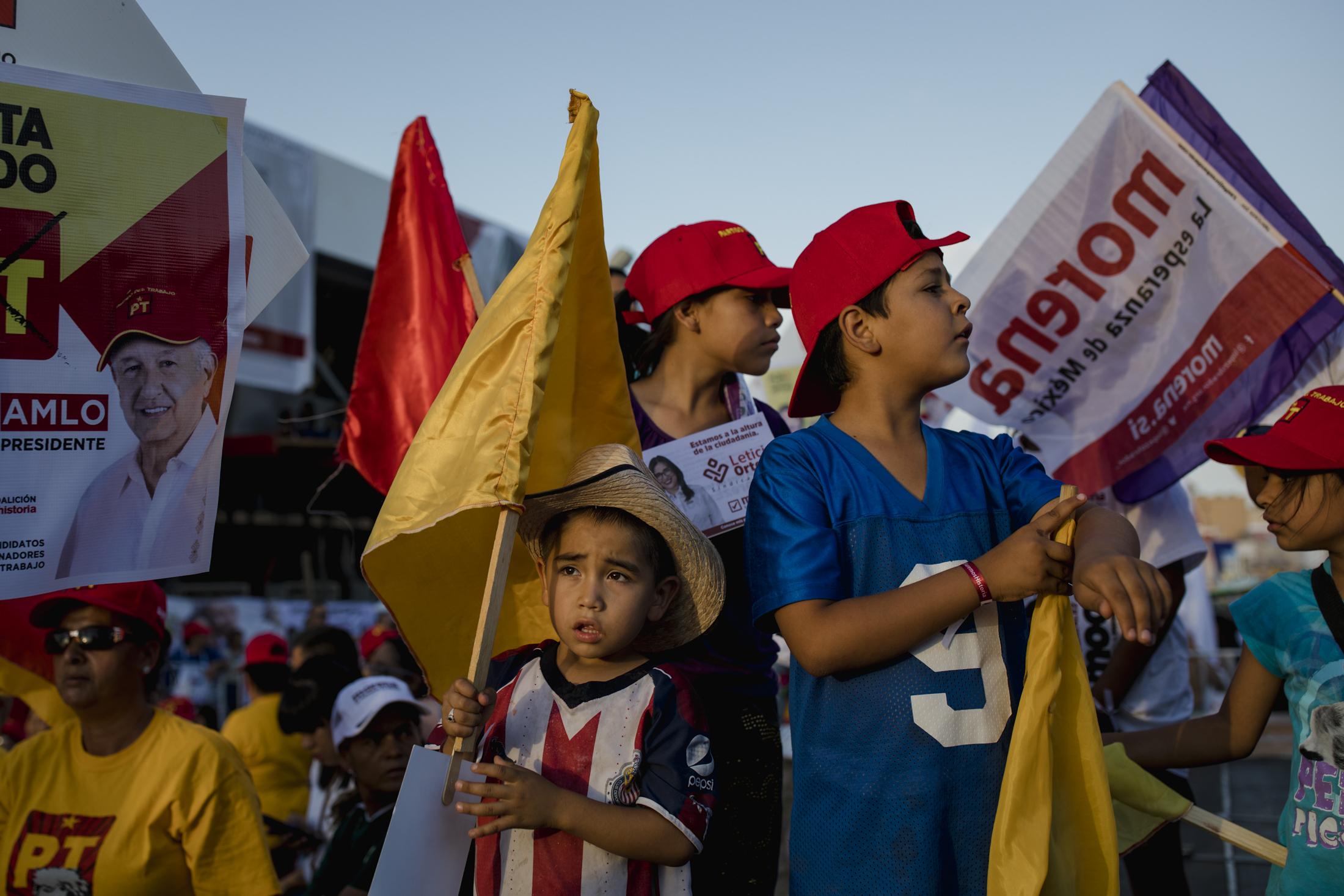 A rally for then Mexican presidential candidate Andres Manuel Lopez Obrador was held in Cuidad Juárez days before the July 1, 2018 election. Mexicans elected Lopez Obrador who will determine the direction of a country battling drug wars, corruption and a forty percent poverty rate. Since September of 2017, over 100 politicians have been killed. “The country will be cleansed,” said Lopez Obrador. 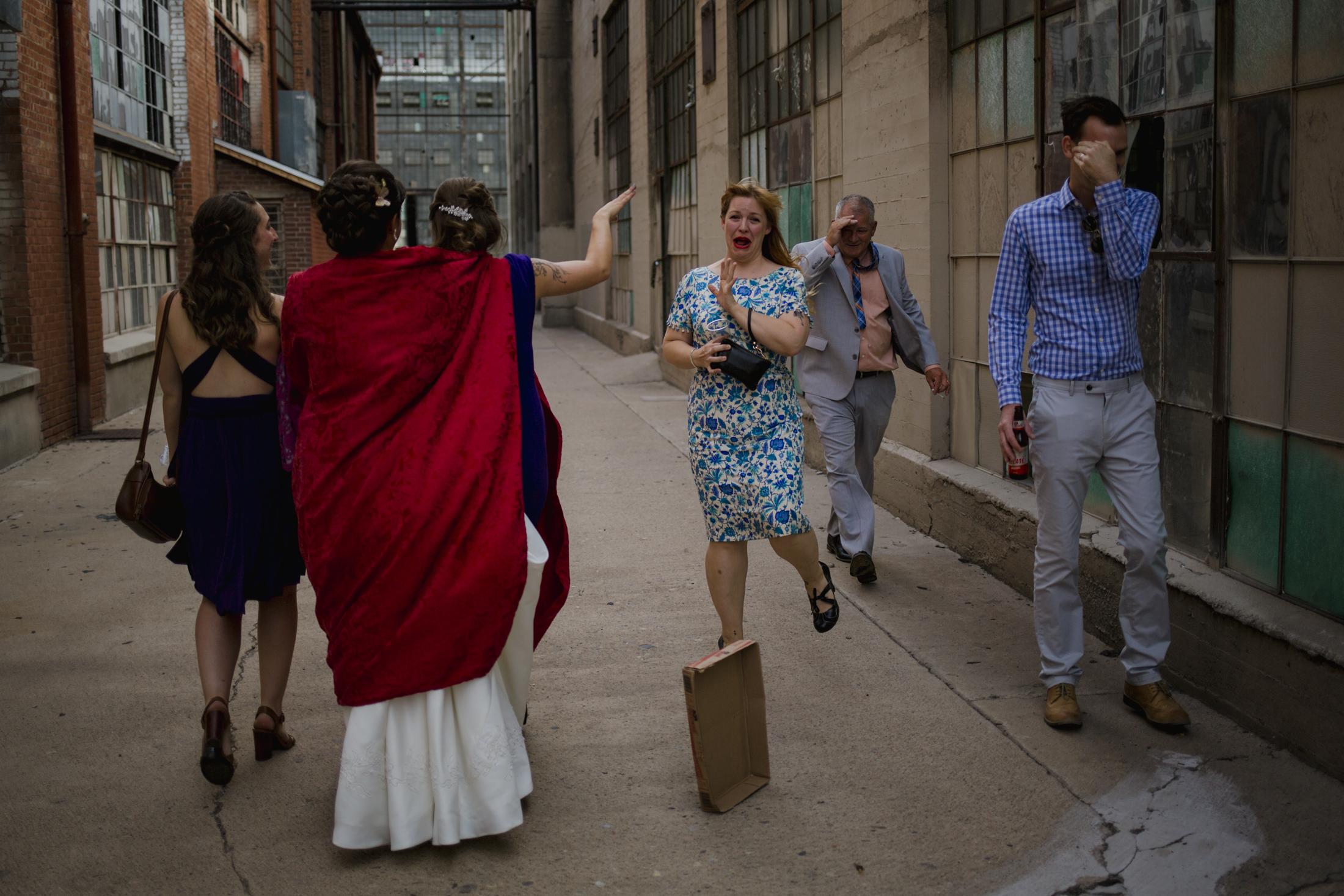 Wedding attendees react to seeing the bride before the ceremony at the Rail Yards in Albuquerque, New Mexico. 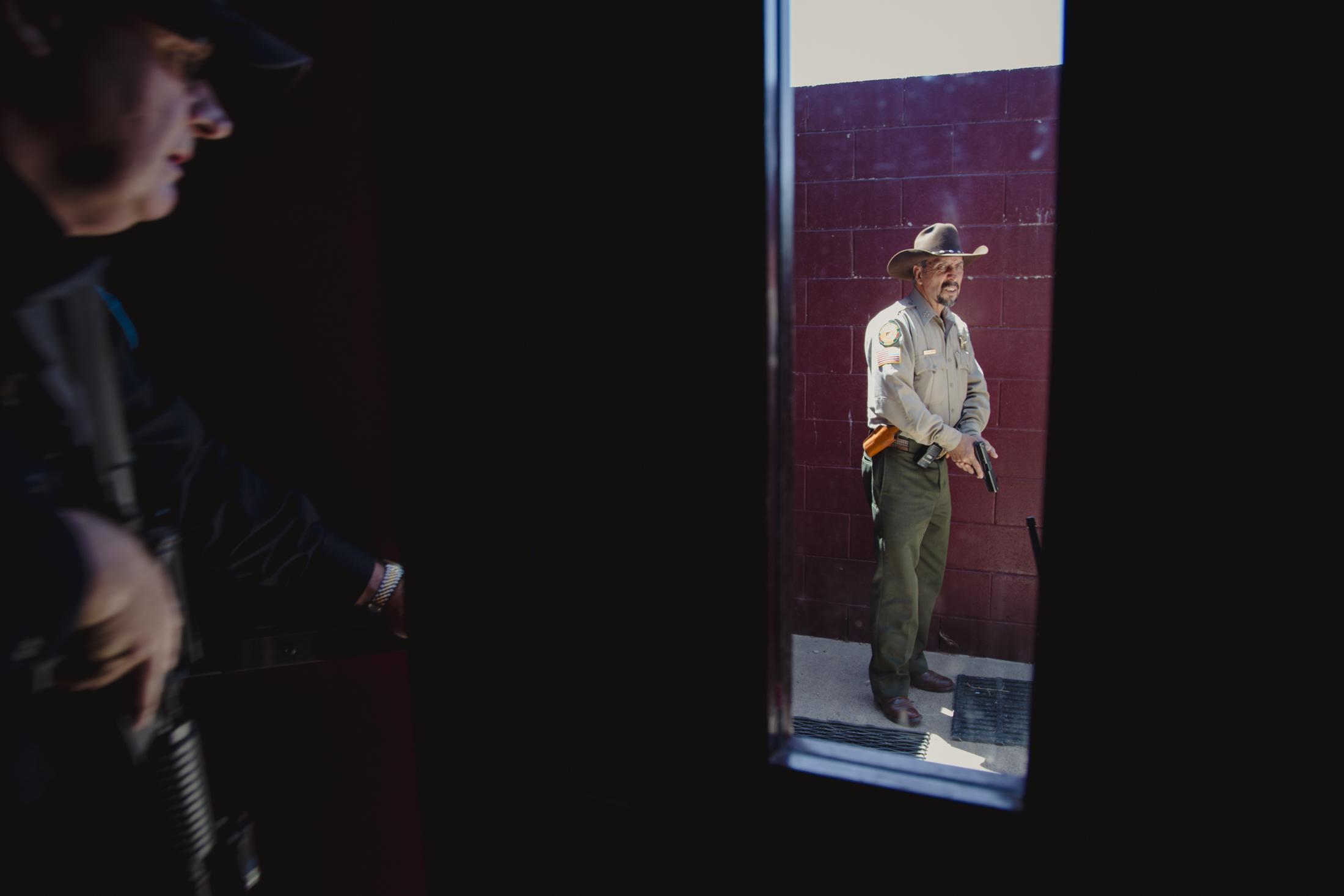 Guadalupe County Sherif Michael Lucero stands with his gun drawn during an "active shooter" drill that tested the emergency responders communication and protocols in the instance a shooter were at large at the elementary school in Vaughn, New Mexico. 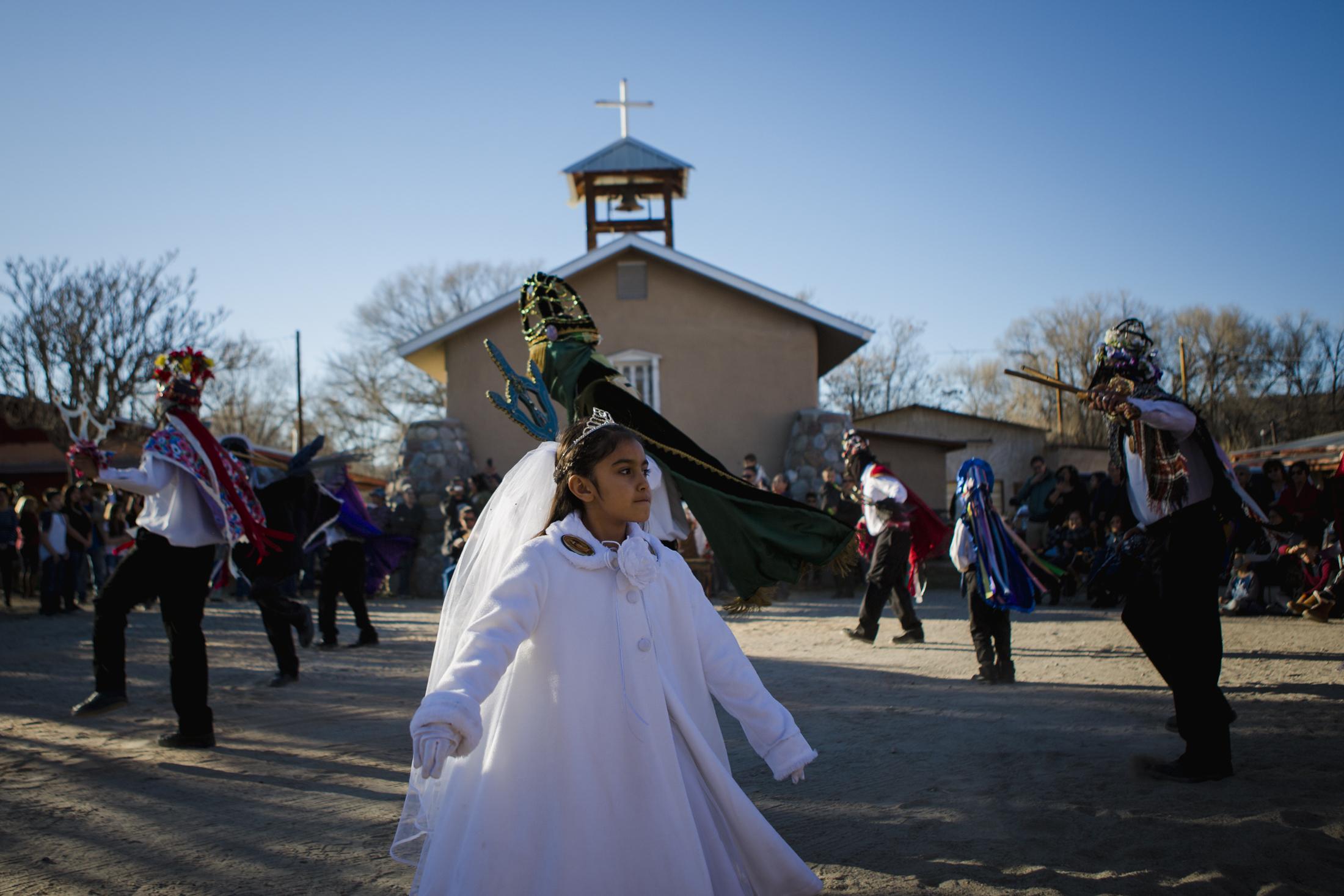 Eight-year-old Brienna Martinez dances with the Los Matachines de Alcalde dancers outside of La Capilla de San Antonio in Alcalde, New Mexico on December 27, 2017. Dressed in all white, she plays the role of La Malinche, who represents purity and the first convert to Christianity in New Spain, Doña Marina. 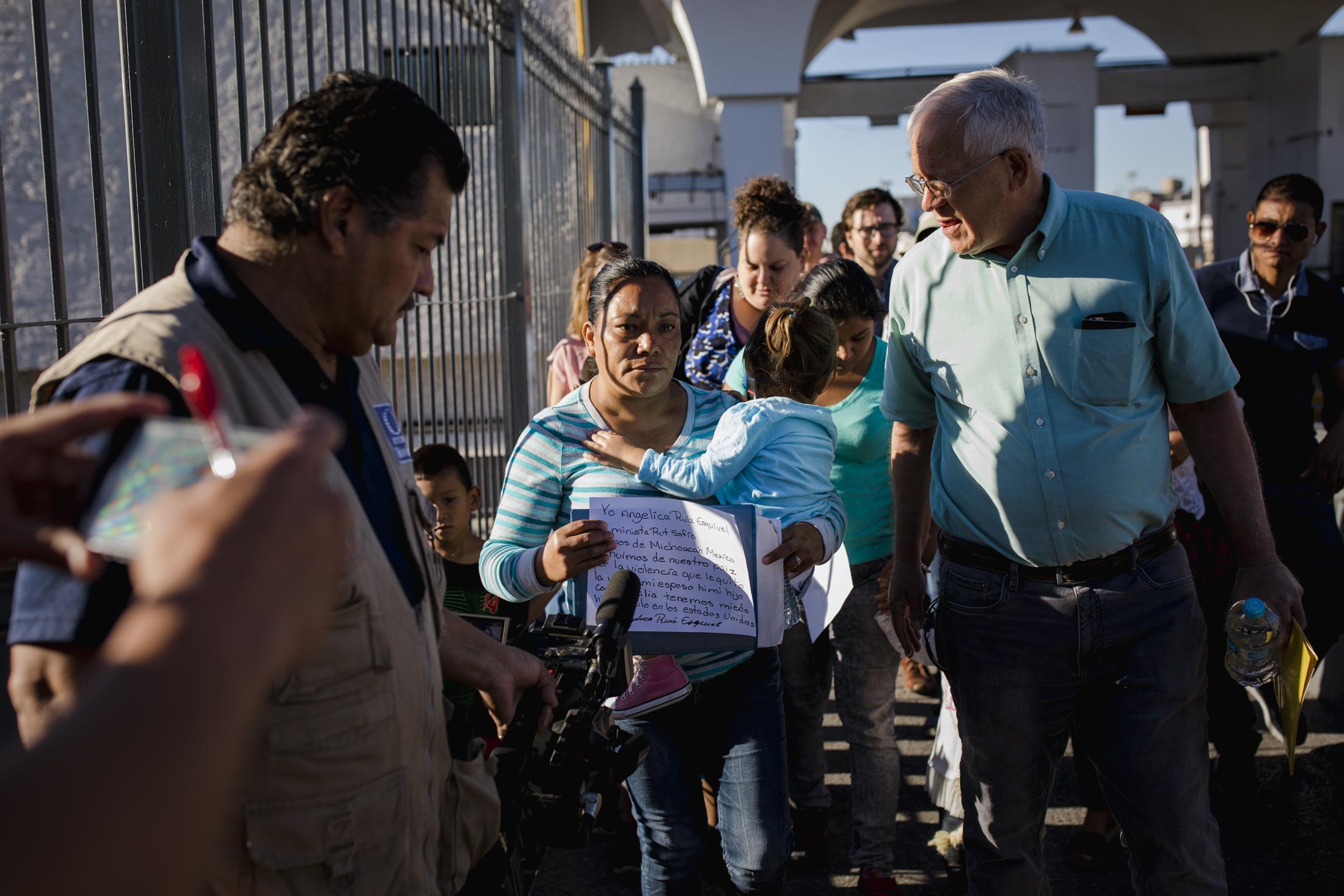 Angelica of Michoacán walks through the El Paso del Norte Port of Entry with Ruben Garcia of Annunciation House, a migrant aid agency, at the international boundary line to cross into the United States to seek asylum for her and her grandchild on June 20, 2018. 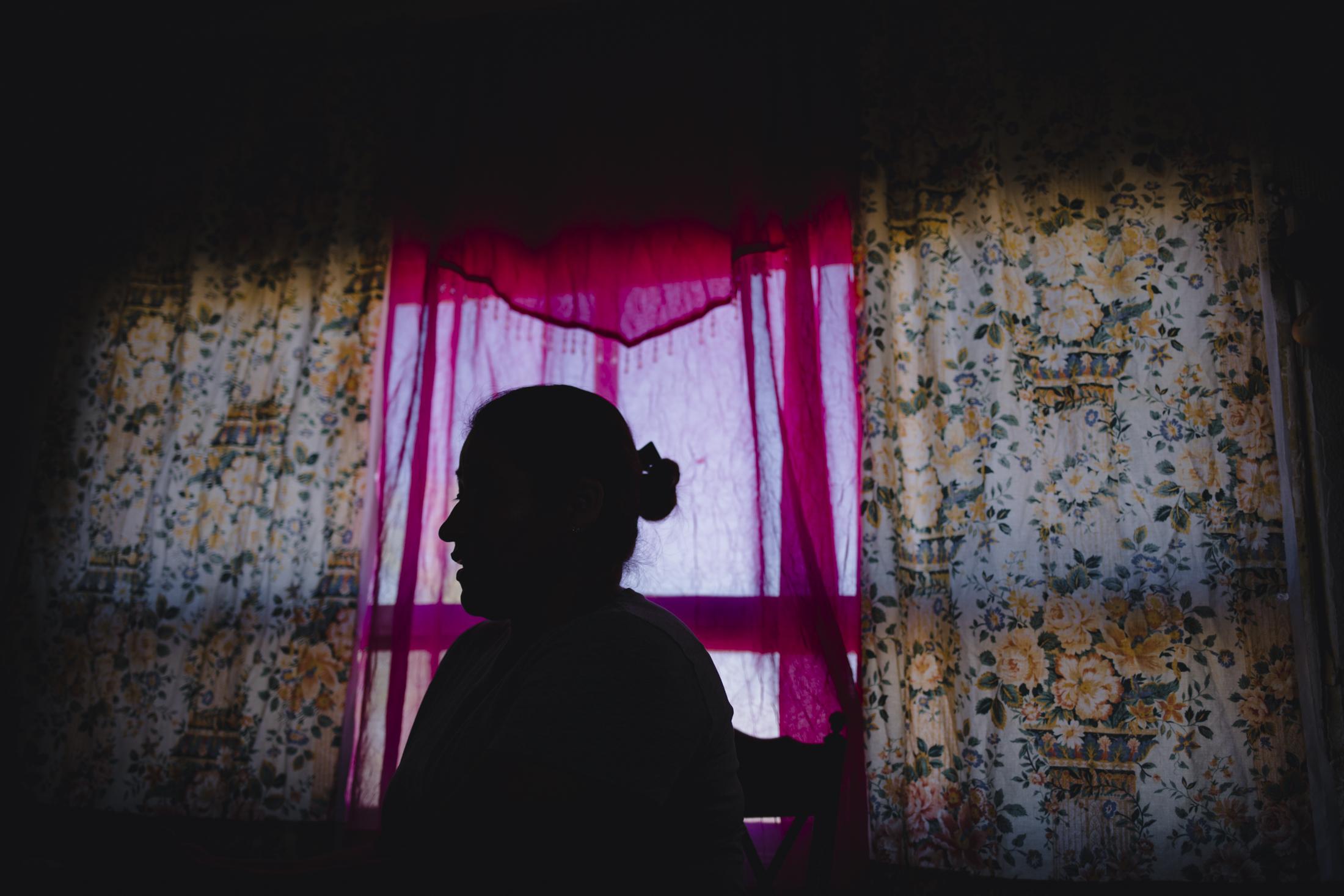 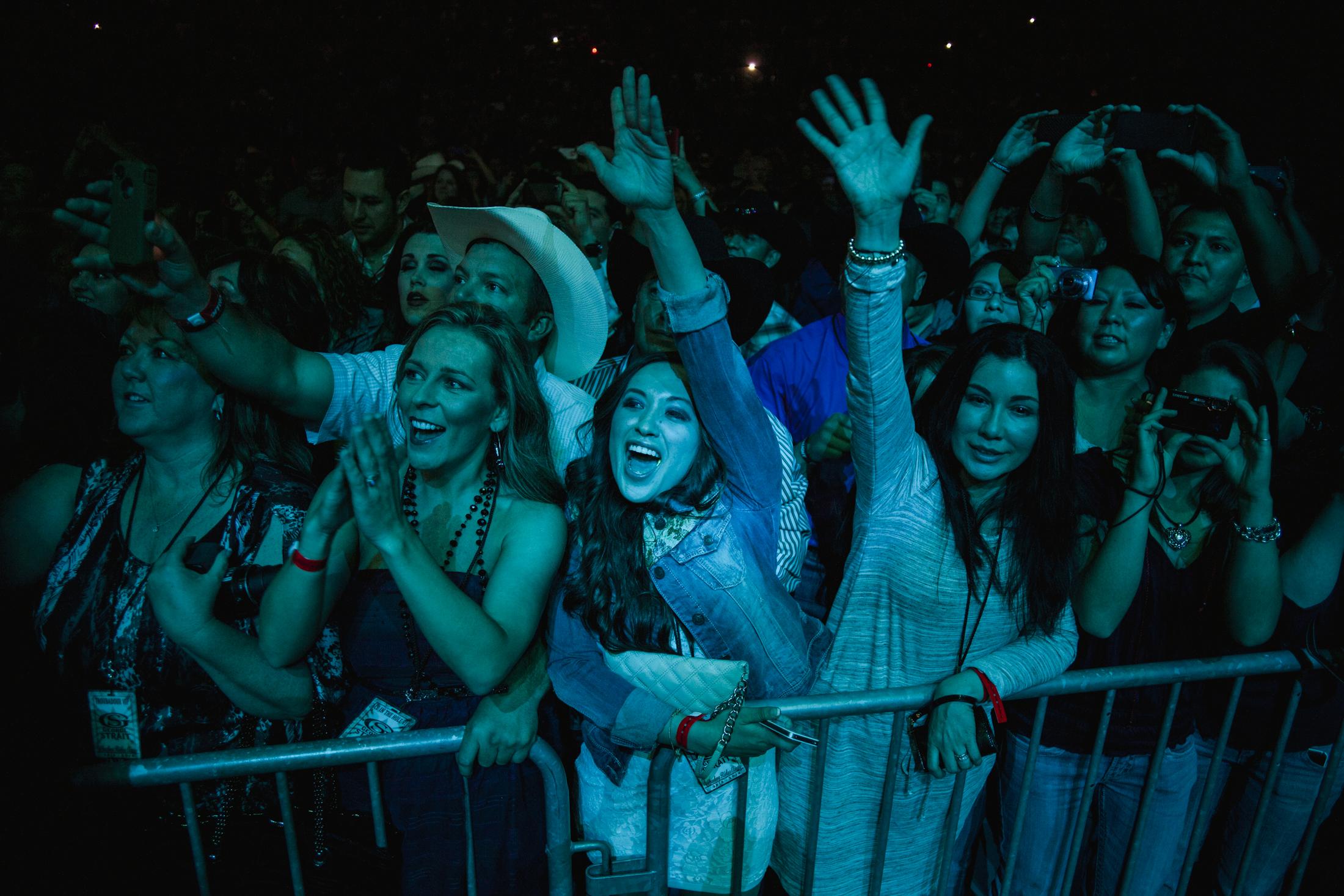 Fans cheer for George Strait during performance at The Pit in Albuquerque, NM on April 5, 2013. 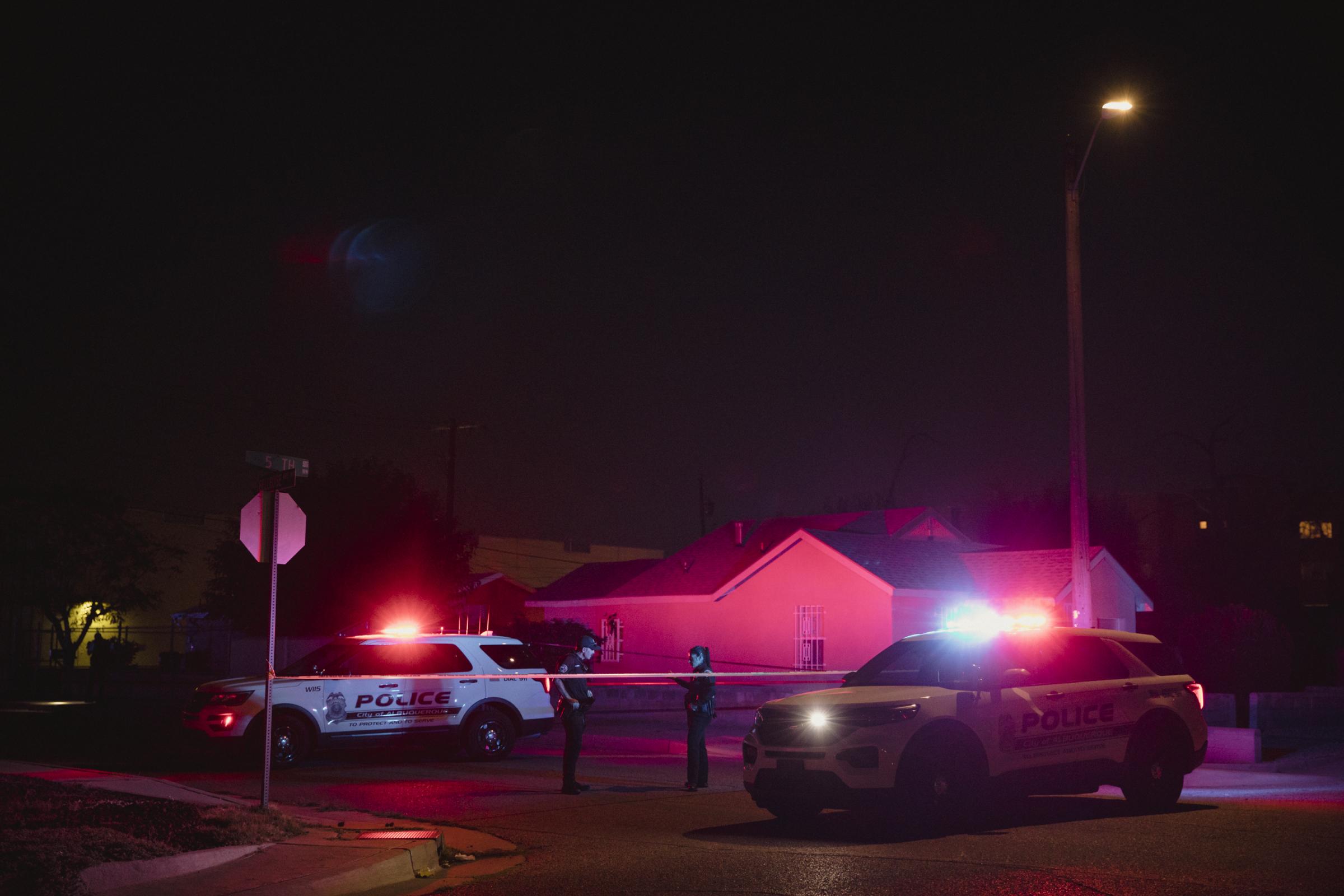 Officers from the Albuquerque Police Department secure a crime scene in Albuquerque, NM on September 6, 2021. Around 5:45pm a Tobacco Town employee shot an alleged robber and the individual was found down the street on the sidewalk who had succumbed to the injury. On September 7, 2021 APD released an update stating that the case is likely to be determined a justifiable homicide based on the preliminary review of evidence.

Adria Malcolm is a freelance photojournalist based in Albuquerque, New Mexico. She is available for commissions in the United States and throughout the world.